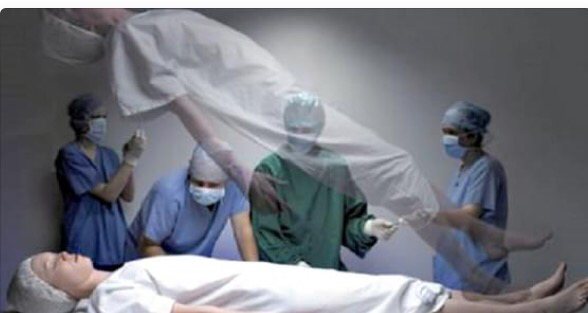 Do you think people have soul? Do you believe in life after death?
People, who have returned to life, retell their unbelievable stories for the experience they had in the afterlife. One of the most unbelievable experiences about afterlife is the one of the 25-year-old brain neurosurgeon Dr. Eben Alexander, trained in Harvard. His story is very unusual, and we are are going to tell you.
Dr. Alexander was not one of those who believe in non-physical spirit sorin afterlife, because he was surrounded by people that invested the material aspect of life. He didn’t even believe in soul. As a skeptic he was, Dr. Alexander believed that those stories about afterlife were just hallucinations and products of someone’s fantasy. Then, something has happened to him. He was in coma for seven days because of bacterial meningitis. While he was in this condition, he experienced a journey that completely altered his perception about afterlife.
When he returned to his body, the scientist wrote a book that very quickly became number one New York Times bestseller, “Proof of Heaven”. In his book, Dr. Alexander wrote about his experience. He stated that his life on earth is in fact just a test that can help our souls to develop and evolve and that this growth can be achieved through compassion and love. He has made many points, and we will show you some of them.
– Love was the essence of the afterlife that dominated to the extent that it diminished the presence of the evil. Everyone who wants to understand the Universe should first know love.
– Dr. Alexander reckons that his existence as a human on Earth is only an artificial dream compared to that experience he had, because of the fact that that experience was very real.
– The communication he had in the afterlife was telepathic, and words were unnecessary because all questions and all answer were given telepathically.
Doctor Alexander said that the best thing about the spiritual realm is that people are precious and more loved that a man can possibly imagine. One more amazing thing about this is that people there are always safe and they’re never alone, as the unconditional, ideal love of God impacts everybody.
The scientist explains that love is the most important thing. He talks about the usual kind of love that we all know – the love toward our children or spouse, the love for our animals, not about the abstract love. This love is selfless and is it not jealous at all. It’s love in its purest and strongest form, the unconditional kind of love.
The ultimate truth and the ultimate reality is this one, and it lives and it breathes at the core of everything that exists or will ever exist. Those who don’t know love and who don’t represent it in all their actions are not able to understand accurately who and what they are, says Dr. Alexander.
So, let’s say a word or two on the credibility. When the doctor was in coma, his neocortex wasn’t functioning and that’s why there was no scientific evidence about the reason he experienced that. He refuted even 9 scientific explanations about what happened to him in his own book.

The 5 possible explanations in Appendix B of the doctor’s book are the following:
We also have to mention that some of the explanations might not make sense to us, laymen,for that reason we only give the most common explanations he has refuted.
The explanation about this being only a primitive brain-stream program in order to alleviate the life-threatening pain and the suffering was not accepted by Alexander as it didn’t explain the rich nature of his memories.

As some people think, what the doctor experienced was just an unclear recall of memories from the deepest parts of the system such as the amygdale which has sufficient overlying brain to be protected from the bacterial inflammation going on the surface of the brain. Still, this also does not cover the nature of his memories.

Another possible explanation could be that this may have been DMT dump. The DMT is a natural serotonin which produces visions. Anyway, the doctor is very familiar to the (LSD),serotonin associated drug experiences from times he was teenager and he knows that this was not a DMT experience that was based on his patient’s DMT experiences. His recollections are very vivid and they are ultra-real and according lythey need a functioning audio and visual neocortex as target regions wherein to produce a rich experience as his. The prolonged coma in which he was has ruined his neocortex that was to affect the audiovisual experiences which have to be result of serotonin from the raphe nuclei in his brain-stream. However, knowing that his cortex wasn’t functioning, the possibility that the DMT acted in the brain is definitely excluded.

Another possible explanation might be the reboot phenomenon. That is a random dump of disjointed memories as a result of some old memories in the influenced neocortex that might happen on restarting the cortex into consciousness after a long-lasting failure such as meningitis. Anyway, this option cannot be taken in consideration, because his memories were detailed and vivid.

One another option is that what Dr. Alexander experienced is some unusual memory generation through an archaic visual pathway. On the other hand, this can only be achieved in birds, not in humans, since humans can experience it just in situations when they are cortically blind. This doesn’t offer the explanation to the ultra-real recollections that he has and it doesn’t explain the auditory-visual incorporation.

The near-death experience of Doctor Alexander can be considered to be the most credible one, as he has a scientific background.
Source: http://healthyworldrecipes.com/author/admin/

Hello World, my name is Emmanuel Victor Agyare. I describe myself as a prolific article writer and an inspirational blogger. This website is managed and owned by myself and my lovely wife, Princess Agyare who is an editor and a co-contributor of this website. It is truly our greatest heart's desire to help others find encouragement and fulfilment through a balance of healthy living principles and God's Word. I will encourage anyone reading this now not to lose hope in life no matter how hard things will be. Persevere and never give up. There's room for everyone at the top. Enjoy this website!!! Warmest regards, Emmanuel Victor Agyare (Administrator & Webmaster) View all posts by Emmanuel Victor Agyare